Until recently, there were two distinct camps in the software world: the Windows (A.K.A. closed) world and the Linux (A.K.A. open) world. In the Linux world, we had tools like the bash shell, Java programming language, Eclipse IDE, MySQL database, and many other open-source projects by Apache. In the Windows world, we had similar, yet distinct tools mainly developed by Microsoft, such as the C# programming language, Visual Studio IDE, SQL Server and PowerShell.

These two worlds existed side-by-side for many years with minimal interaction. You had to pick your side and stick with it. If you had to switch sides, you had to go through a slow process of readjusting your existing tools with similar-yet-quite-different counterparts and it was painful.

In the last few years, the tech world has gone through a gradual revolution. In 2014, Microsoft open-sourced the .NET framework to everyone’s surprise. This was followed by OpenSSH running on Windows in 2015. 2016 was probably the most exciting year with SQL Server and PowerShell running on Linux, Bash running on Windows, and most imporantly ASP.NET Core, the new cross-platform version of ASP.NET, running on Linux, Mac and Windows.

As Microsoft opened up its technology to the world, we were very busy at Google ensuring that .NET has first-class support on Google Cloud Platform (GCP). In 2016, we added support for deploying traditional ASP.NET apps to Windows Servers on Compute Engine. We introduced a Visual Studio plugin and PowerShell cmdlets to manage GCP resources. We made Microsoft SQL Server available on Compute Engine. Last but not least, we started supporting containerised ASP.NET Core apps on App Engine and on Kubernetes running on Container Engine. I cover both in detail later in the article. As a result of our work, Google joined the .NET foundation in November 2016. It was a busy year!

It is very exciting that the Windows and Linux worlds are coming together, and opening up many opportunities for .NET developers. In the rest of the article, I want to talk specifically about what GCP is doing for .NET.

GCP provides a number of services and tools for developers to build on top of Google’s infrastructure. Java, Python, Go, Node.js, Ruby, PHP and of course C# are some of the supported languages. Let’s take a look at the options you have when it comes to application development. 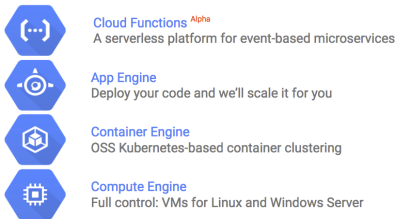 At top of the chain is Cloud Functions. This is the serverless platform for event-driven microservices. It currently supports Node.js functions. The beauty of Cloud Functions is that you only need to worry about writing and deploying your function and Google takes care of running that function at scale. This is perfect for simple apps with a limited number of specialised microservices.

Sometimes, you need more than a function. You need an application with frontend and backend talking to different services. For those kind of apps, GCP offers App Engine. The idea behind App Engine is similar to Cloud Functions, in that you write your app and let Google manage and auto-scale it as required. The underlying infrastructure is abstracted away from you which means you don’t have to deal with DevOps.

If you already made the switch to containerised apps using Docker and need more control in how your app is structured and run, there’s Kubernetes and Container Engine (GKE). You can very easily get a Kubernetes cluster running on GKE with a single command and deploy your containers in any configuration you like.

Finally, if you want full control, GCP has Linux and Windows Server virtual machines (VM) running on Compute Engine. Since they are VMs, you have full control on what gets installed however, you also have full responsibility which means that you need to manually configure auto-scaling, patch software, and so on.

GCP provides a number of ways to support your app development. Let’s take a look at how GCP specifically supports .NET apps.

If you have a traditional ASP.NET app running on Windows, you can easily take that app and migrate it to Compute Engine on GCP. 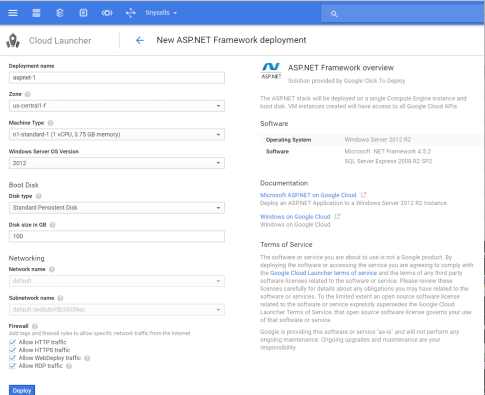 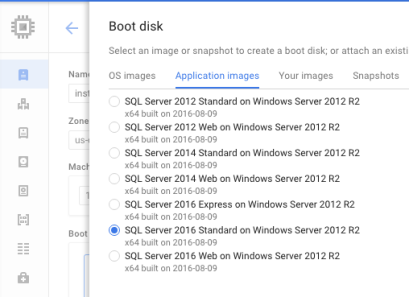 ASP.NET Core is the next generation, multi-platform version of ASP.NET. It is the leaner version of traditional ASP.NET framework and runs on Linux, Mac and Windows. 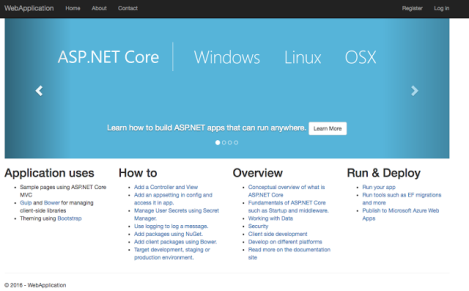 App Engine has been around as a PaaS offering from Google for a while but it wasn’t available to .NET developers until ASP.NET Core came along. It is now possible to wrap an ASP.NET Core app into a Docker container and deploy that container to App Engine to run. The main advantage of App Engine is that it abstracts away the infrastructure, so developers simply deploy their app and the day-to-day running and scaling of that app is done by Google.

If you want more fine-grained control on how your containers are structured and deployed, you can always create a Kubernetes cluster on Container Engine (GKE). GKE makes it trivial to create a cluster and Kubernetes makes running containers easier by providing a high level API to automate deployment, scaling and running of containers in production.

Once you have your app running in Google Cloud, many services automatically become available to your app through native .NET client libraries. 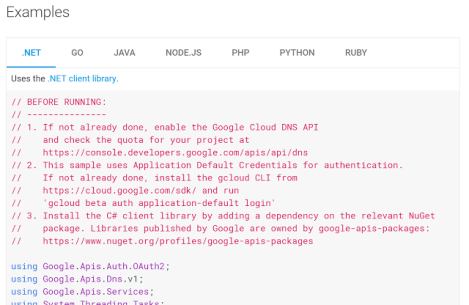 You can integrate with services like Cloud Storage for binary storage, Pub/Sub for messaging, BigQuery for incredibly fast queries, Vision API to detect images, and many other machine learning APIs such as the Natural Language Processing API, Speech API, and Translate API.

By running on Google Cloud, you will automatically gain access to these new capabilities as new services are added, and that’s the beauty of the cloud.

GCP has a Visual Studio plugin to manage cloud resources directly from Visual Studio. It is available from the Visual Studio Gallery and can be installed directly within Visual Studio. It provides some ASP.NET MVC and Web API templates to work with GCP projects. It also has a Google Cloud Explorer where you manage see and manage Compute Engine and Cloud SQL instances, as well as Cloud Storage resources.

PowerShell is a command-line shell and associated scripting language built on the .NET Framework. It’s the default task automation and configuration management tool used in the Windows world.

We’re going through some exciting times. With Windows ecosystem opening up and ASP.NET Core’s multi-platform story, there are a lot of new opportunities for .NET world. At Google, we’re serious about supporting Windows and .NET workloads on Google Cloud Platform. It’s a great time to be a .NET developer for sure!

Originally published at meteatamel.wordpress.com on March 20, 2017.