Knative 0.8.0 came out a couple of weeks ago with a number of fixes and improvements. One of the biggest changes in 0.8.0 is that Knative Build is now deprecated according to docs:

Knative Installation docs also only include Knative Serving and Eventing without mentioning Build:

Good to know but there’s no explanation on why Knative Build was deprecated and any guidance on what is the replacement, if any. After a little bit of research, I have more information on deprecation and also a migration path that I’d like to share in this post.

There’s a Knative issue ( 614) with more details but basically, it has been decided that building and pushing an image for a service should not be one of the core responsibilities for Knative.

Before you can use Tekton Pipelines, you need to install it in your Kubernetes cluster. Detailed instructions are here but it’s as easy as:

Once you have it installed, you can check the Tekton pods:

There’s basic documentation on Migrating from Knative Build to Tekton. In a nutshell, these are Tekton equivalents of Knative Build constructs:

Additionally, the Tekton Catalog aims to provide a catalog of re-usable Tasks, similar to what Knative BuildTemplate repository used to do before.

As an example, let’s take a look at how to build and push an image to Google Container Registry (GCR) using Tekton Pipelines.

In Tekton world, you start with either defining your custom Task ( example) or re-using someone else’s Task ( example). Let’s use the Kaniko Task already available on Tekton Catalog.

First, install the Kaniko Task and make sure it’s installed:

Second, define a TaskRun to use the Task and supply the required parameters:

Finally, start the TaskRun and check that it’s succeeded:

At this point, you should see the container image built and pushed to GCR. 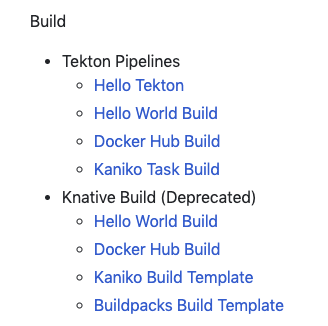