In part 3 of the blog series, I talked about how we transformed our Windows-only .NET Framework app to a containerized multi-platform .NET Core app.

This removed our dependency on Windows and enabled us to deploy to Linux-based platforms such as App Engine (Flex). On the other hand, the app still ran on VMs, it was billed per second even if nobody used it, deployments were slow and most importantly, it was a single monolith that was deployed and scaled as a single unit.

In the last phase of modernization, I want to talk about how we transformed our monolith into a set of serverless microservices with Cloud Run and the benefits of that transformation.

After containerization of our app in early 2019, we wanted to run it in a managed/serverless platform, mainly to avoid VM pricing. However, Cloud Functions did not support C#/.NET as a runtime (and still does not) and that tied our hands until mid 2019.

In mid 2019, Cloud Run was announced at Google Cloud Next conference in San Francisco, as a new fully managed platform to run stateless containers. Our app was already stateless (all the state was in-memory) and it was already containerized, so Cloud Run was immediately a game changer for us.

After a quick update of our code to ASP.NET Core 3.0, we were able to deploy our container to Cloud Run with a single gcloud command. We essentially replaced App Engine with Cloud Run overnight:

These were pretty quick wins with almost no effort.

Despite the quick wins, Cloud Run also amplified the problems caused by the monolith nature of our app. Our app was composed of 3 services: reader, transformer and web frontend bundled and deployed together. This caused issues such as:

All of these issues made it obvious that we had to finally decompose our monolith into separate services.

Monolith decomposition sounds like a good idea in theory. In reality, it is quite difficult to do properly. There are many questions you need to answer:

There are many other considerations but you get the idea. Monolith decomposition is not as straightforward as you might think.

In the end, this is the architecture we ended up with: 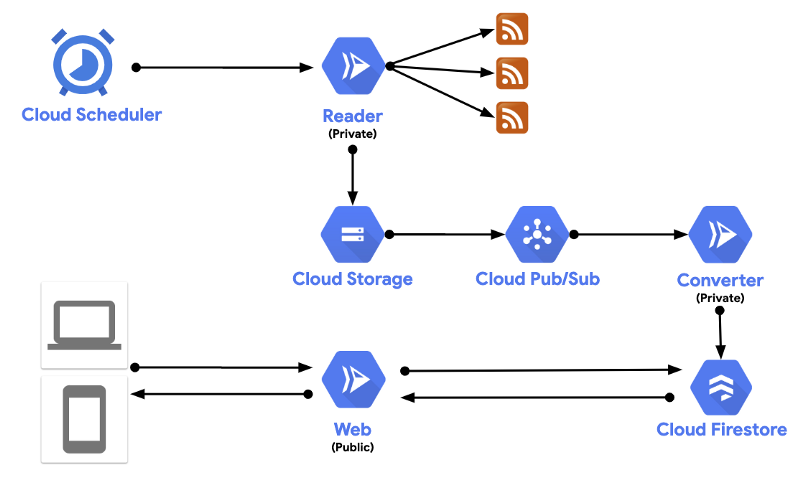 If you want to take a closer look at the code, it’s already on GitHub: https://github.com/meteatamel/amathus

The final architecture solved pretty much all the issues I outlined earlier. There are 3 focused services doing 1 thing at a time well. Each service can be independently reasoned about, updated and scaled. Updating is not scary anymore. It’s just an update to one of the services and the revision feature of Cloud Run makes reverting back to previous code very easy. There’s loose dependency between services via Pub/Sub and Firestore. No issue with cold starts as the Web frontend is backed with Firestore and it’s pretty quick to start up.

On the flip side, the architecture is considerably more complex than before. There are a few moving parts and overall setup is not as easy as a single Cloud Run service with no external dependencies. However, that’s the price we were willing to pay to make the architecture more resilient and easier to update.

This wraps up the 4 part blog series on our app modernization journey. Hope you enjoyed reading about our journey and if you have feedback or questions, feel free to reach out to me on Twitter @meteatamel